Over the past four years the number of atheists in Russia has doubled. Here we examine who exactly are those Russians who have been turning away from the Orthodox Church, and whether the hemorrhaging of believers can be stopped.

“When I was a child, I used to wear a small cross, which I lost about five times, and at some point I decided that either God was turning away from me or he didn’t exist. As a teenager, I came to the conclusion that it was simply a misunderstanding, and that there was no need to believe in anyone, and decided to stop believing in God,” is how Daniil Istomin from Moscow, an 18-year-old college student and future primary school teacher, explains his drift to atheism.

Daniil’s parents have always believed in God and used to go to church almost every day to pray and light a candle. But his father always refused to listen to his son’s dissenting opinion – according to Istomin. They don’t discuss God in their family “because Dad is very embittered; he believes in God too strongly”.

“My parents believe that Jesus Christ brings happiness and that because of this everything is well with them. Fortunately, they no longer take me to church – after all, I am grown up now,” says Daniil.

From protest to considered choice

In the course of four years, from 2017 to 2021, the number of atheists in Russia has doubled – from 7 percent to 14 percent, according to an opinion poll by the All-Russia Center for the Study of Public Opinion (VTsIOM).

“My parents had me baptized when I was three years old, no one asked me about it, and, anyway, at that age I didn’t really understand what was happening. How, after that, can I call myself an Orthodox believer?” wonders Tatyana Melnikova, a Year 11 school graduate. 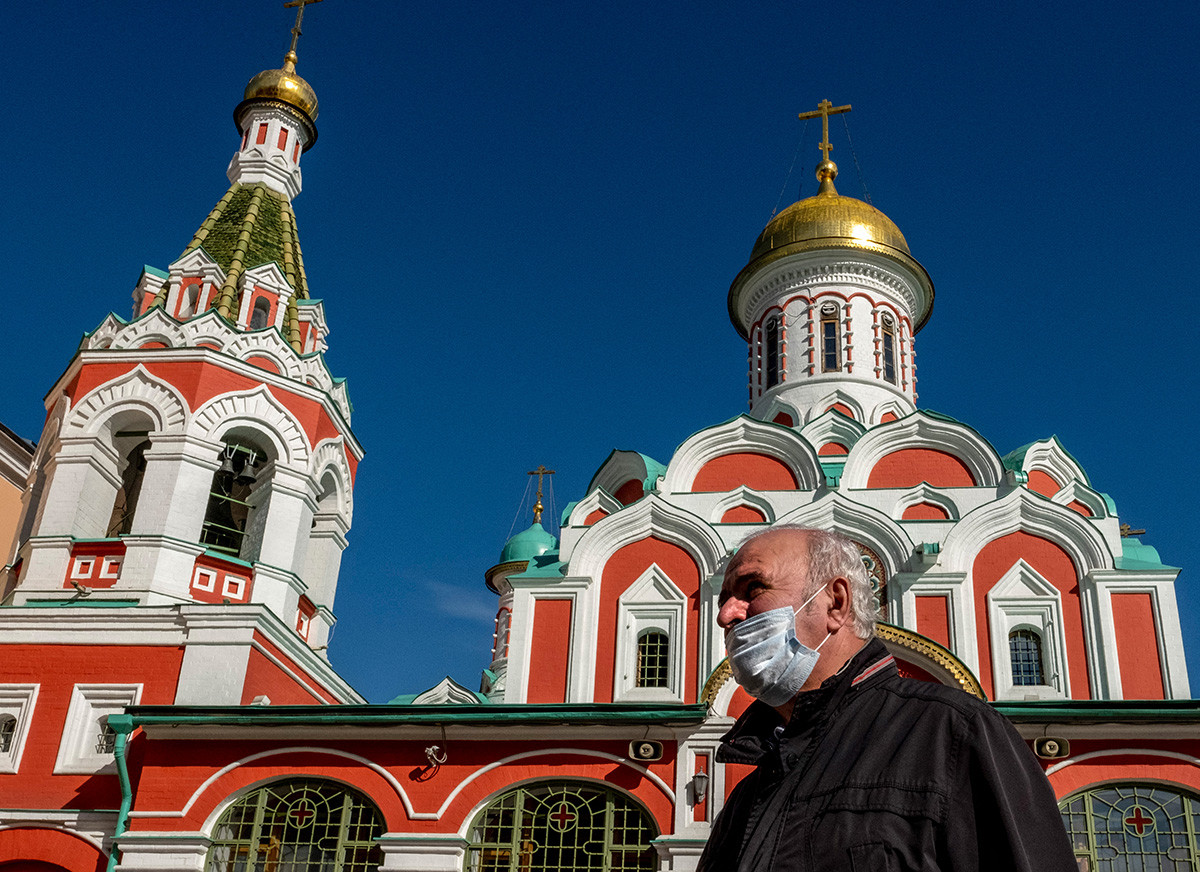 A man wearing a face mask to protect against the coronavirus disease walks past a Russian Orthodox cathedral on Red Square in central Moscow on October 2, 2020 AFP

According to VTsIOM, young people between the age of 18 and 24 (22 percent) are most likely to regard themselves as atheists. Tatyana is one of them. Her outlook on life was influenced by her parents’ faith and early access to social networks – she realized she didn’t believe in God at the age of just 10.

“I don’t remember what I had read or watched, but nobody forced this choice on me. Nevertheless, arguments about faith with my parents still arise from time to time, but each of us remains unconvinced,” Melnikova complains.

Another 18 percent of atheists among those polled are in the 25-34 age bracket.

“At the age of 14, I read the Bible in full out of interest and found too many inconsistencies. I’ve read the Q&As on the websites of churches and of the Patriarchate, but they do not stand up to criticism and all their dogmas are too outdated,” is how Artyom Belotigrov, a 32-year-old lawyer, explains his journey to atheism.

After he finished school, Artyom developed an interest in the sciences and completely stopped believing in God. True, he still visits churches but he now regards them as architectural monuments.

“My parents were happy with my range of interests but, when I started questioning the dogmas of Christianity – that is, ‘Why hasn’t a single person been resurrected from the dead yet?’ or ‘Why does God allow war and hunger, which make innocent people suffer?’ – and later asking them these questions directly, they began to be unpleasantly surprised, which gave me reason to doubt the existence of the supernatural. But until I finished school, my mother’s opinion carried a lot of weight with me,” says Serbyanin. 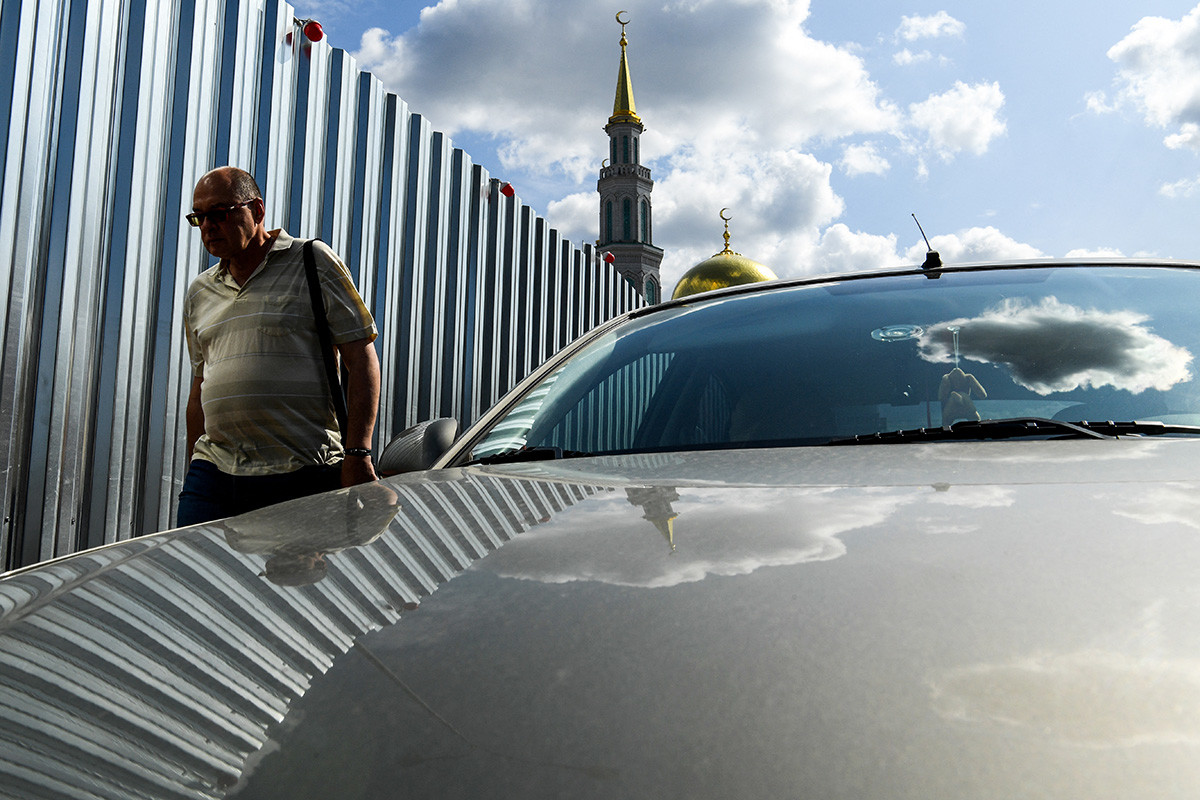 A man walks past a metal fence surrounding a construction site near Moscow’s Sobornaya mosque on August 7, 2019 AFP

At university, Boris studied philosophy, astronomy, physics and chemistry, and there he was almost finally convinced that God didn’t exist. In 2011, first his mother and then his grandmother died. For some time after that he used to go to Orthodox churches and sometimes attend services, observe Christian festivals and pray, but he believed it was his reaction to grief.

“No matter how much you pray, you can’t bring a person back. No matter how many candles you light, you can’t protect yourself against cancer. Having recovered from my grief, I started reading books on collective hypnosis, shamanism and gypsy spells, and realized that God, the Devil, curses, wood-sprites, spirits and ghosts are nothing more than folklore,” Serbyanin says in conclusion. 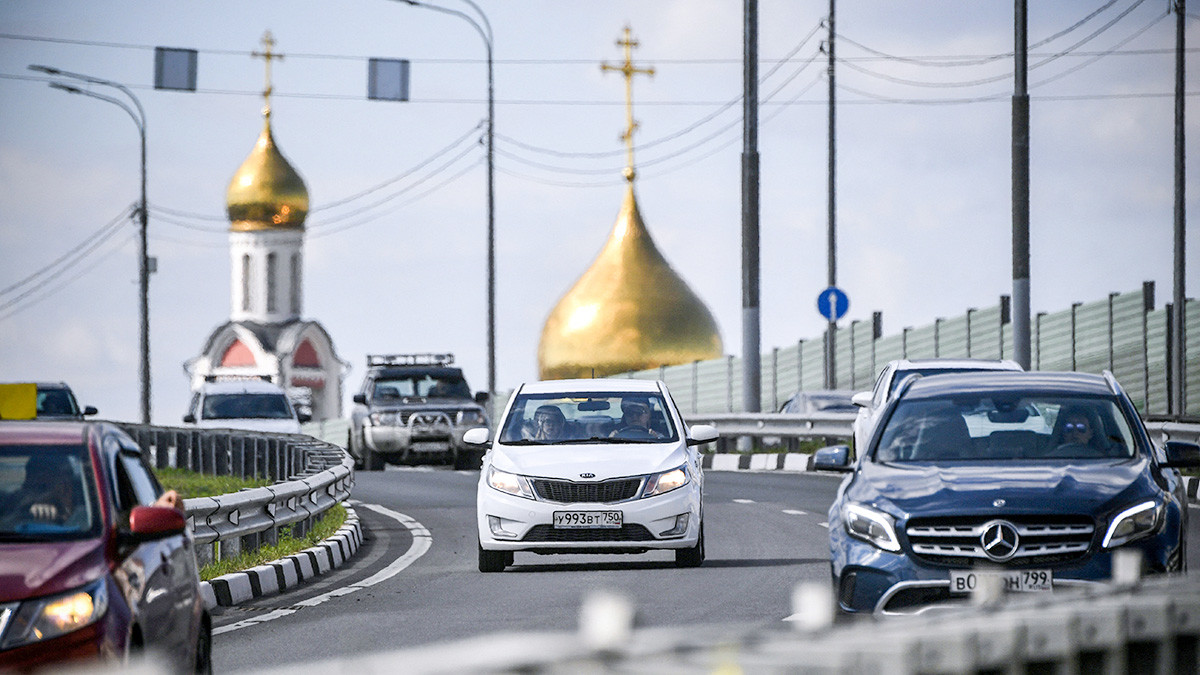 Cars move along a motorway in the Moscow satellite town of Odintsovo on June 17, 2019, as the Cathedral of Saint George the Victorious is seen in the background AFP

Atheists of age 35 years and older also explain their philosophy of life as a considered choice, but some of them admit that life in the Soviet period shaped any belief in God they might have had. It was a time when the church was fully separated from the state, and propaganda promoting scientific atheism was disseminated in the country.

“I was attracted by atheism back in the Soviet period, and then in the 1990s everyone, of course, became a believer. I started studying the history and geography of religions from a scientific viewpoint. It became obvious to me that there are only two genuinely opposing worldviews: the scientific and the religious. My parents, who are Catholics, would like me to be a believer, although they haven’t been regular church-goers in recent years,” says Alexander Ovsyannikov, an on-line teacher of foreign languages, geography and biology.

Another atheist, Lyubov Fomina, explained her lack of belief in God in the following way: “I was born in 1977. I’m a Soviet person. That’s all there is to it.”

From atheism to God

In the course of four years, from 2017 to 2021, the number of Orthodox Russian Christians has fallen by 9 percent. At the same time, some actually give up their atheism and start believing in God.

“I had just had a baby and my husband had lost his job. We couldn’t see how we were to carry on and how to give our child all the essentials for a normal life. At one point, my mother-in-law insisted that I go to a certain church in St. Petersburg to pray to the saints. When I went through the door of the church, I seemed to lose my inner voice. I couldn’t even force myself to think of anything, and the tears rolled from my eyes,” 38-year-old housewife Yuliya Lareva recalls. 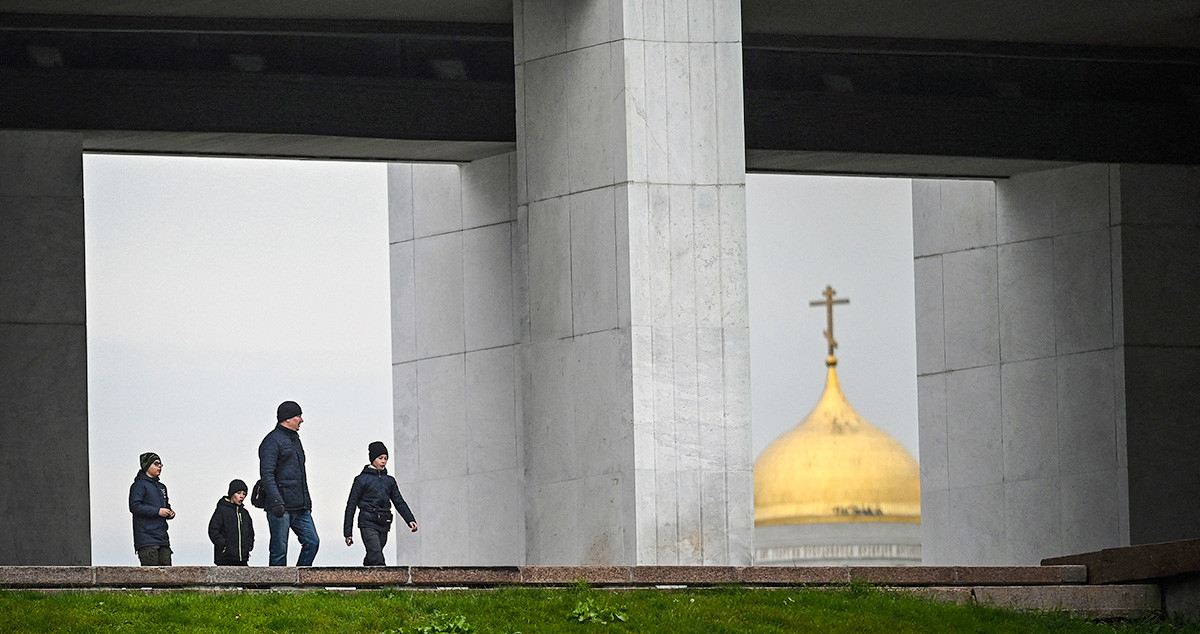 People walk at the Museum of the Great Patriotic War at Poklonnaya Hill in Moscow on October 30, 2020 AFP

She says that shortly after that trip her husband found a good job with a very decent salary, and then Yuliya started studying the Bible and attending church services.

“And we have absolutely no doubt that a saint interceded for us. Now my husband and I are expecting a new addition to our family. We are happy with everything and thank the Lord for everything!” Lareva says delightedly.

Thirty-five-year-old Sergey Rogozhkin did not particularly believe in God at a young age, but became convinced of the existence of God during his school years. He says that when a certain proportion of his classmates were “chasing after girls”, his own friends were interested in theories of the origin of the universe, and the idea that the world was created by God seemed to him the most logical one.

“Youthful maximalism and the injustice of reality are more conducive to religiosity,” Rogozhkin says. “I even made Mom learn the Lord’s Prayer and the Apostles’ Creed off by heart, but I didn’t try to convince Dad. He’s a Soviet atheist with a good anti-religious training.”

Fifty-year-old Anzhelika Praslova from Veliky Novgorod didn’t start believing in God straight away, either. She went to church for the first time in the 1990s when she wanted to become pregnant.

“I had a child seven years later, but only decided to become a church-goer after the death of my husband – this wasn’t out of grief, however, but because of my release from an unhappy marriage. God continues to support, tolerate and instruct me to this day, revealing different angles and new feelings. It is a new and very interesting period of growing up,” is how Praslova puts it.

In her opinion, there is no such thing as an atheist: “They are not atheists, just halfwits”, she says.

The growing number of atheists in Russia is primarily bolstered by the development of science and technology, according to religious affairs expert Denis Batarchuk.

“Statistics show that the more educational establishments a country or even a city have, the lower are the attendances at church services. I think the issue is that while science actually works, religion merely promises. Science simply provides more tangible answers to questions, and young people like that,” Batarchuk said in a Channel 360 television interview. 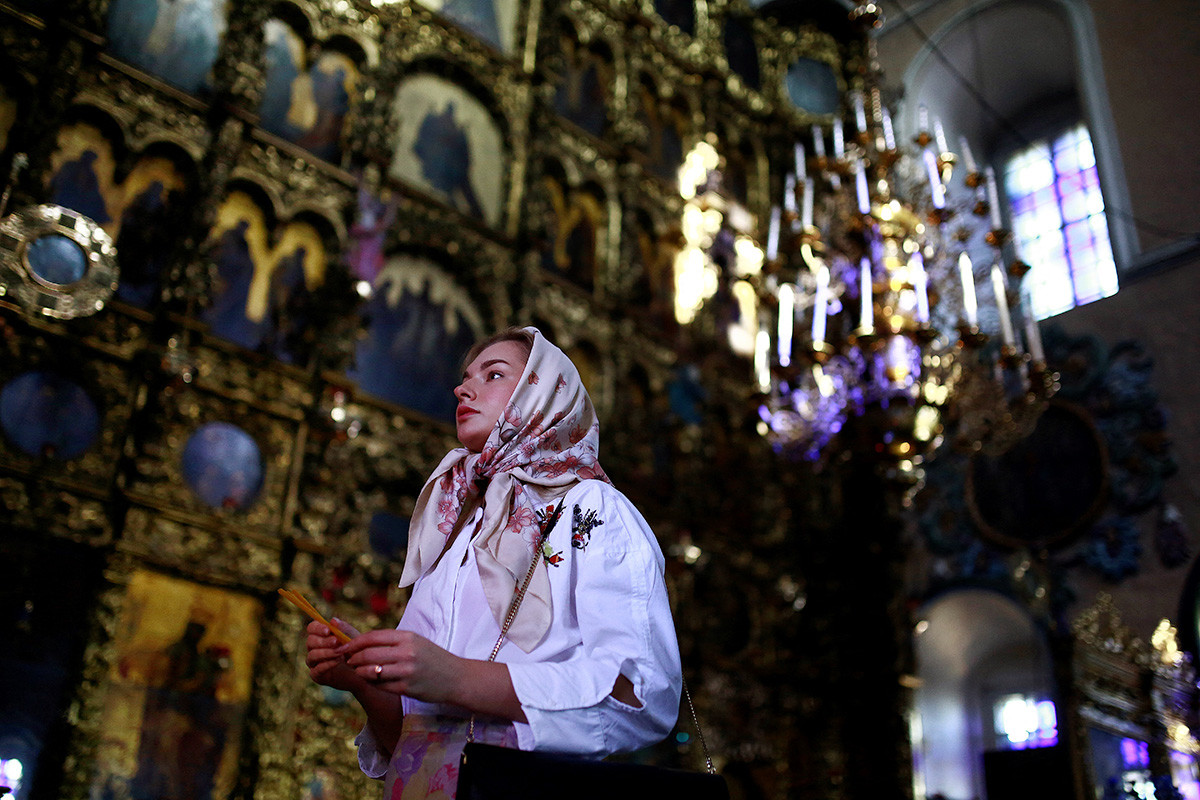 Rushan Taktarov, deputy chairman of Russia’s only registered society of atheists – its name is just that: “Atheists of Russia” – says that the Russian Orthodox Church is excessively determined to drum its religion into ordinary citizens and that this puts off a certain portion of Russians.

“It’s all taking place in full view of ordinary citizens. Too many churches are being built, and the Russian Orthodox Church itself is attempting to impinge on the secular status of the state – for instance, it is proposing a ban on abortions. And then we mustn’t forget that we live in the information age and people have access to all kinds of information, and that is why we have the results that we see,” according to Taktarov.

Another religious affairs expert, Vyacheslav Terekhov, believes that the growing number of atheists is not at a critical level and is not an indicator of the collapse of the church as an institution.

“Young people are always looking for a philosophy of life. They are prone to changing their worldview more frequently than people of maturer years. <…> This can subsequently change. It is possible that 10 years hence a proportion of young atheists will see things differently,” Terekhov believes.

Moreover, in his view, today’s Orthodox Church really does have a negative image, and many Russians don’t want to be associated with this image.

“The media frequently present the church in an exclusively negative context, and, apart from that, it’s possible that the church itself is under pressure from the authorities, who want to make Orthodoxy part of a state ideology – opposition-minded Russians can see this and don’t want to have anything to do with the Church,” Terekhov says. 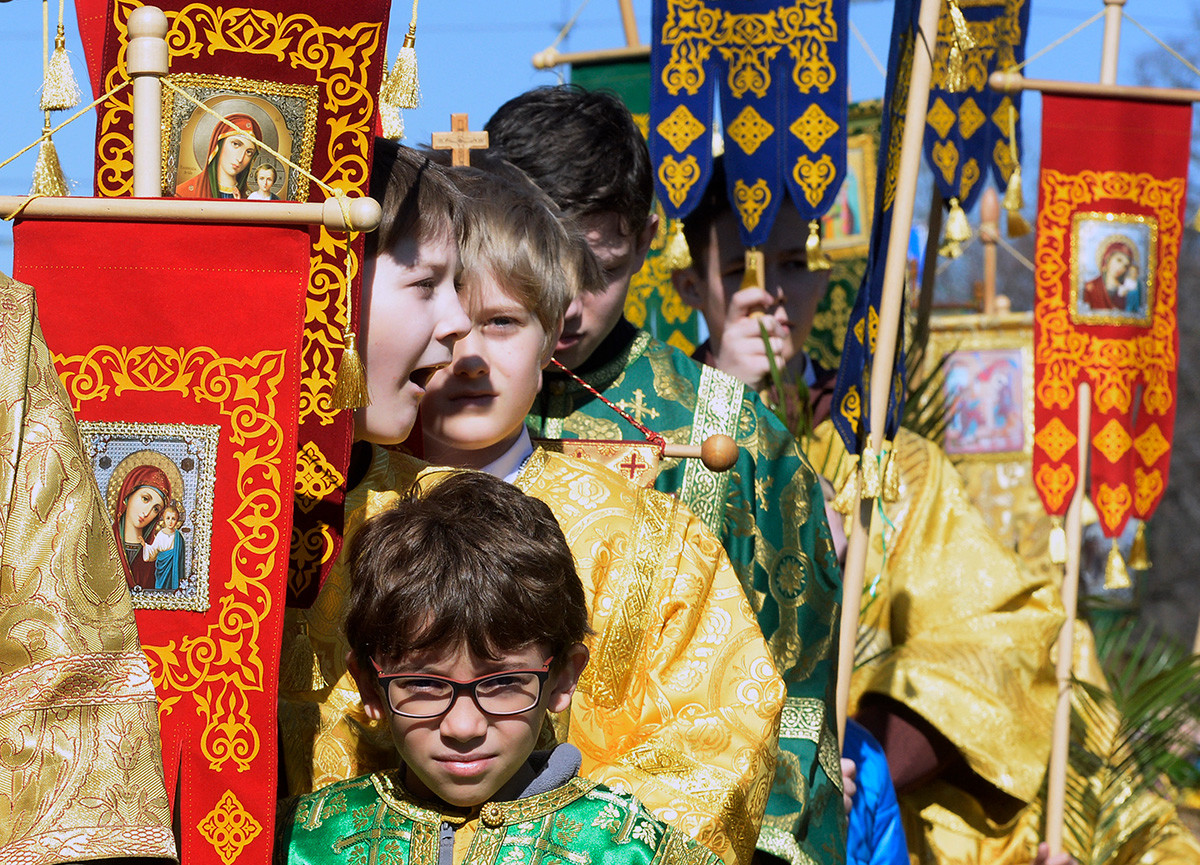 Nikolay Babkin, a priest, agrees that there are more atheists now – but, in his view, this is just a vagary of fashion that can be challenged if more is said about the life of the church from the inside.

“We need to enlighten and inform people about the work the Russian Orthodox Church does. It is difficult but necessary to change the stereotype that church is merely a place where people pray and dress strangely, a place of golden cupolas and incomprehensible chanting in an esoteric language. Such notions are formed on the basis of films, primarily Western ones,”  the priest believes.

Russia Beyond sent a request for comment to the Russian Orthodox Church, but there has been no reply as of the date of publication.